Kick the Tires to Avoid “Program of the Month” Syndrome 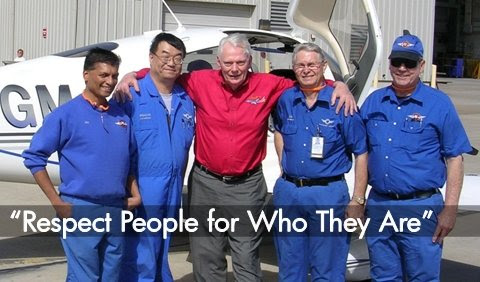 If I see something I really like, or have a suggestion to offer, I’ll often send a letter to the CEO of the company involved. I rarely get a response, and when I do it’s usually a form letter from an under-assistant manager in the PR department.

The exception was always Herb Kelleher, Chairman Emeritus of Southwest Airlines. Herb responded to every letter with a warm personal reply, often with a splash of humor.

Several years ago I was scheduled to speak at an event in Dallas. I wrote Herb to ask if he’d be around, saying that I’d love to just stop by and say hello. He replied with an invitation for me to join him for dinner the evening I was to be in town.

At the restaurant, Herb knew many of the servers by name, and asked one of them about the health of his father. Four different times during the meal, other diners stop by our booth to thank Herb for a kindness that had been given to them or a loved one while flying Southwest Airlines.

In my opinion, Herb Kelleher did more to define cultural greatness than any other leader ever. He passed away yesterday at the age of 87. There is a wonderful tribute in yesterday’s Dallas News.

One aspect of Herb’s legacy is the set of values that guide Southwest Airlines. A great statement of values should define these three things: who you are, what you stand for, and what you won’t stand for. Southwest’s three core values do a great job of doing that.

Warrior Spirit: During our dinner, Herb took great delight in recounting some of the times the Southwest team came together to fight off competitive threats from other airlines. When United Airlines launched their discount TED Airlines, it was an arrow aimed directly at the heart of Southwest Airlines. “Remember TED,” Herb asked with a laugh. “No one else does either.”

Servant’s Heart: In their book Nuts! About the culture of Southwest Airlines, Kevin and Jackie Freiberg share story after story of a servant leadership at every level of the company; the sorts of stories that I heard at the dinner table that evening. After dinner, Herb asked how I was getting back to my hotel room. When I told him I’d Uber it, he piled me into his car and had his driver make a detour to drop me off.

Fun-LUVing Attitude: Southwest is famous for the joy that many flight attendants put into giving the pre-flight safety instructions (google David Holmes or Marty Cobb for some great examples). Several years ago, a Spark Plug newsletter reader sent me pictures he’d taken on a Southwest flight where, to celebrate a young passenger’s sixth birthday, the flight attendants made a “cake” by sticking 6 swizzle sticks into a roll of toilet paper, then turned off the interior lights and asked everyone on board to turn on their reading lights and sing happy birthday. That little boy, and his parents, will remember that birthday for the rest of their lives, and you know that Mom and Dad will tell the story to everyone they know.

I took the picture below at the Atlanta airport. I often include it in my presentations to show how Southwest Airlines uses their reputation for positive attitudes to create a competitive advantage. One time I asked what would happen if United Airlines ran the exact same ad. An audience member replied that someone would paint a mustache on the flight attendant. “Who would do that?” I asked. Someone else hollered out, “Another United employee!” The same thing could never be said of a Southwest employee.

Herb Kelleher was a one-of-a-kind leader, but it would be a better world – and our organizations would be better places to work and do a better job of serving our customers – if more of us would emulate his example. 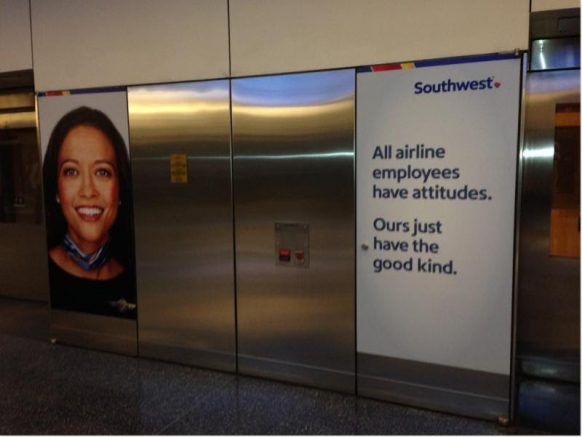