The #1 Resource for Positive Culture Change

There are No Guarantees But You Should Try Anyway

Confront Negative Behaviors in a Positive Way- and The Pickle Challenge for Charity 2.0

Many years ago I attended a concert by the legendary classical guitarist Andres Segovia. There was a man sitting close to the stage coughing uncontrollably. Upon concluding his first piece, Segovia walked to the front of the stage, pulled a small box of cough drops from his pocket and offered one to the man who’d been interrupting his performance. To the relief of those around him, the man instantly got up and fast-marched out of the auditorium (quite red in the face, I’m sure).

Now, Segovia could have sent the message by just glaring at the man – the passive-aggressive approach. Or he could have verbally reprimanded him for his rudeness – the disciplinary approach. Instead, he offered to help. Had the man accepted the offer he could have stayed to enjoy the rest of the concert. And instead of leaving feeling humiliated, I have no doubt that he would have received a round of applause for having been so gracious in accepting that help.

There’s a great lesson there for building a more positive culture. It’s a lesson that lies at the heart of The Pickle Challenge for Charity. Instead of ignoring or confronting people who are chronically complaining, gossiping and finger-pointing, encourage them to turn their complaint into a contribution by making a 25-cent donation to charity.

Doctors Hospital of Augusta recently launched their Pickle Challenge for Charity. Decorated pickle jars, and banners like the one pictured above, have showed up all around the hospital. And on the first official day of the challenge those decorated pickle jars collected more than $1,000 – in just one day – as people became more aware of their own negative attitudes and those of the people around them. They are now well on their way toward hitting their target of raising $5,000 for the HCA Hope Fund, the charity they selected for their Pickle Challenge donations.

We will soon be launching Version 2.0 of The Pickle Challenge for Charity. During the first round, 42 hospitals and health systems raised more than $80,000 for the charities they each selected by transforming more than 300,000 complaints into 25-cent donations during their one-week Pickle Challenge periods.

Our goal for Pickle Challenge 2.0 is to engage 100 hospitals and other organizations that will commit to conducting our validated before-and-after Culture Assessment Survey to document the impact of this positive approach to confronting negative attitudes and behaviors. And, more important, to help spark a movement to eradicate toxic emotional negativity from the workplace, the way we once needed a movement to eradicate toxic cigarette smoke.

Watch this space for the formal announcement. Better yet, respond to this Spark Plug or send me an email (Joe@ValuesCoach.com) and I’ll send you a detailed prospectus for The Pickle Challenge 2.0.

See us at the AHA Leadership Summit!

If you are planning to be at the AHA Leadership Summit in San Diego next month stop by our booth #7 outside of the exhibit hall and we’ll tell you more about The Pickle Challenge 2.0. Look for our banner – and the sour pickle guy glowering over us. 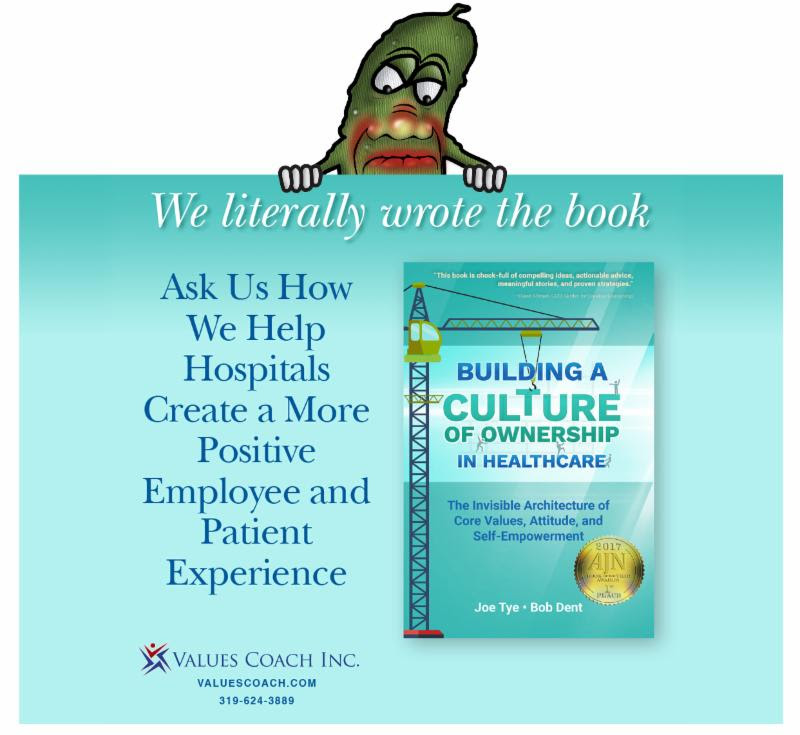