Spark a Bias for Action to Close out the Year and Set the Stage for 2019!

Complaining Will Ruin Your Life – This Promise Will Change Your Life 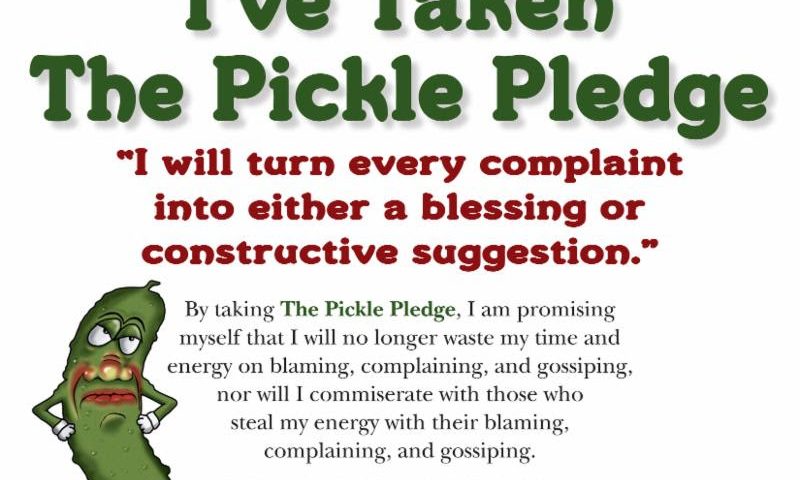 The other day I was standing in the McDonald’s line at the Denver Airport. The woman standing next to me was vociferously complaining about how long she’d been waiting (at this point it had been about three minutes). When someone who’d put in their order after she did was called, she became downright irate. “Did you forget my order?” she demanded, and was clearly offended when the busy server ignored her.

When her food did come out after another 90 seconds (I timed it), she snatched her two bags and huffed, “About time!”

I smiled at her and said, “How about thank you?”

Combine the visages of Darth Vader, Lord Voldemort and Donald Trump at their most viciously angry and you’ll have some idea of the way she looked at me before she stormed off.
I cannot imagine that she enjoyed her lunch, and am pretty sure she carried that sense of wounded entitlement onto the next flight with her.

Had she taken The Pickle Pledge to heart, she would have turned her complaint into a blessing. Instead of whining about the fact that the already rushed McDonald’s crew (who were clearly doing their best while working at their minimum wage jobs) had not rushed her to the front of the line, she would have been grateful for the fact that she didn’t have to board her flight hungry.

And she would have come up with a constructive suggestion. Instead of standing there playing the victim role (“poor me, they aren’t all bending over backwards to make my life easy”) she would have found something constructive to do with those two minutes. She might even have had a short and pleasant conversation with the man standing next to her.

Take a minute (that’s it – just one minute) and watch the joy that the Environmental Services Department at Children’s Hospital of New Orleans puts into, and gets out of, their daily reciting of The Pickle Pledge.

As shown in this infographic, chronic whining and complaining can severely diminish the quality of your life. It is a way of telling the world – the way that woman in the McDonald’s line at the Denver Airport was – that you see yourself as a victim because the world is not bending over backwards to make your life easier. If you are in the habit of complaining about every little thing, stop it. Replace resentment and victimhood with gratitude and initiative by weaving The Pickle Pledge into the DNA of your personal character.