Not perfect? So what – start anyway!

The Power of Pounce – A Real World Success Lesson from TV

Business do not fail – owners quit: Questions to ask yourself before you throw in the towel 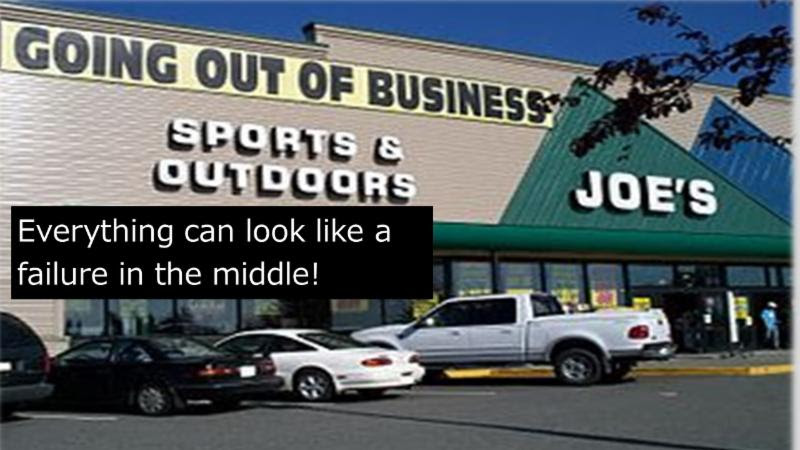 “Brick walls are not there to stop you, they are there to make you prove how much you want something.”

You have, I’m sure, heard the statement that eight or nine out of all new businesses fail within a certain number of years. That’s not accurate because many of the “failed” businesses included in that number were started by people who thought they could set up a WordPress website and watch a few episodes of Shark Tank, then wait for the phone to ring (which of course it never did). It’s not really accurate to say that someone failed who was never determined to succeed in the first place.

But not only is that statement not accurate, it’s not even true. I was recently interviewed for the Investor’s Business Daily article Persevere By Finding Courage In Your Convictions. One of the comments I made is that businesses do not fail – owners quit.

For every Joe’s Sporting Goods where the owner through in the towel, there is another similar store where the owner faced the same competitive, financial, or operational challenges and the owner, rather than quitting, stayed up late to make more phone calls, went hat in hand to another bank or another relative for another loan, came up with a new business model and persevered through the challenging times.

Many independent bookstores closed their doors because of big box bookstores like (now defunct) Borders and Barnes & Noble, and more recently Amazon, but if you go through the Denver Airport you’ll see that the owner of Tattered Cover found a way to grow by reaching the millions of travelers who pass through every year. In my home town of Iowa City, Prairie Lights thrives by catering to the literary crowd while right around the corner University books delights Hawkeye fans.

As Randy Pausch wrote in the beautiful quoted above, brick walls are not there to stop you, they are there to make you prove how much you want something. The walls are not optional. Letting them stop you is.

In his book The Dip, Seth Godin writes about the difference between a dip – a slump from which it is possible to recover; a cliff – the drop-off from which recovery is not possible; and a cul-de-sac – a dead end that runs into a brick wall that, one way or another, forces a redirection.

When you are in a slump – in that proverbial valley of the shadow – the challenge is knowing which one of those three situations you are in. It is a very fuzzy line that separates them. So here are several questions that can help you decide whether to throw in the towel or to once again pick up the gloves:

Question #1: How badly do you want it? Are you willing to blast through, climb over, dig under, or skirt around the inevitable brick walls. Are you willing to pay the price of sleepless nights and endless rejections because the dream is simply too important for you to give up on it?

Question #2: Is your dream authentic (Core Action Value #1 in the Values Coach course on The Twelve Core Action Values). Are you doing it because you hope to be featured on Shark Tank and someday own your own island in the Caribbean, or are you inspired to make the world a better place?

Question #3: Who benefits if you persevere? Who suffers if you throw in the towel?

Question #4: Who can you ask for help – for financial assistance, for wise advice, for marketing ideas, for help in packing boxes?

Question #5: What will you regret more in twenty years – having thrown in the towel before having given everything you had to prove how much you wanted it, or having quit while you still had something left in the tank?

The 23rd Psalm says that we walk through the valley of the shadow – not that we must take up permanent residence in the cold darkness.

Anyone who has ever endeavored to do something worthwhile – start a business, write a book, change the laws, help the homeless – will run into brick walls. They will experience dark nights of the soul in the valley of the shadow. The question is, do they pitch a tent down there or do they grit their teeth and keep marching forward toward the sunshine at the other end.

Anything can look like a failure in the middle, so remember: Businesses do not fail, owners quit.